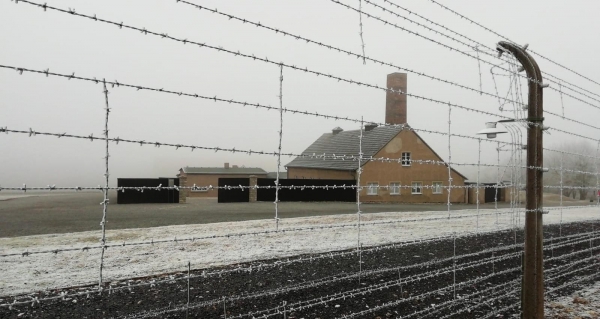 The weekend was approaching and I was intent on looking for something to go to visit, when on the comparative search page these short lines of a poem:

There is a pair of red shoes

on the inner sole it shows

There is a pair of red shoes

on top of a pile

They spoke of Buchenwald (which literally means "beech forest"), located not far from Leipzig.

I arrived in Weimar, it was a gray and cold Saturday, I followed a group of tourists and I got on a bus that would have taken me to 8km from the city, where this camp was built. I looked out the window, we were walking down the Blutstrasse ("the way of blood"), and around it we could only see beech woods, white because of the ice, and every now and then a piece of railway, abandoned for years.

The Buchenwald concentration camp is located on the Ettersberg hill in the Thuringia region. It was established in 1937 and was one of the largest camps in Nazi Germany, where annihilation was experienced through work. The deportees were initially political opponents of the Nazi regime, the so-called asocial and criminal, homosexuals, Jehovah's Witnesses, Jews, Sinti and Roma, but at the time of liberation, on April 11, 1945, 95% of the prisoners came from over 50 countries.

The field is vast, few structures are still intact, most of the barracks have been dismantled. In the fog of that gray day, you could see the crematorium oven and the buildings used for disinfestation. These today welcome a vast permanent exhibition that allows visitors to know the history of Buchenwald in many ways.

The guides tell the story gently, but every single word makes you shiver, it makes you think and everything seems humanly impossible. These places and the many testimonies have to be preserved, observed and listened to so that this apparently distant event does not remain only "a line on a history book".

View the embedded image gallery online at:
https://international.aproformazione.it/en/news/item/320-january-27-not-to-forget#sigProId8c534cb296
More in this category: « LIVING ON YOUR OWN Trip to the zoo with the childern »
back to top