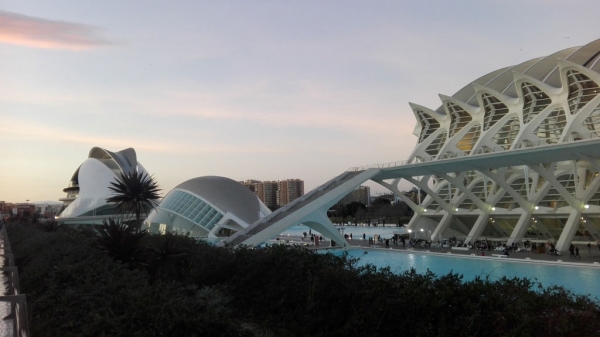 The end of this magnificent experience is approaching and I can say I am grown a lot and that I will never forget this experience.

In these months, we have been able to visit and experience the city to the full. We have visited many museums (the ceramics museum, the patriarch's museum, the museum of fine arts, etc ...), as many parks (the Parc Central, Los Jardines del Monforte, los jardines del hesperadides, ...) and took part in numerous festivals such as Las Fallas, the gay pride, the noche de San Juan and others. But we could not leave without visiting one of the symbols of Valencia: THE CIUDAD DE LAS ARTES Y DE LAS CIENCIAS !!!!!

It is a complex of three modern museums, in which all forms of arts and sciences are "celebrated".

Every museum is surrounded by water and when the hot days begin, you can find boats, balls and water bikes with which children have a great time.

The first structure is called PALAU DE LAS ARTES REINA SOFÍA, an ultramodern structure covered with translucent mosaics, in which various theaters are hosted inside and various shows are held, concerts to honor all the various forms of art.

The second is L'HEMISFERIC, a planetarium in the form of a half-closed eye in which short films with various themes are projected (for example with the theme of space, prehistory, etc.). It is very suggestive as a place, as the projections are directed towards the whole spherical ceiling of the structure (when we went, the short movie had the space as theme, therefore, during the vision, we had the feeling of being watching the film in the sky).

The last one is the magnificent MUSEO DE LAS CIENCIAS PRÍNCIPE FELIPE, an interactive structure reminiscent of the skeleton of a whale, in which adults and children can discover science by engaging in many small 'trials' (for example two people sit and they rest their heads on two bands that measure mental activity: with their mental activity the two people must try to balance the ball).

In addition to this magnificent complex there is another annexed structure which is the largest and most impressive aquarium in Europe, namely L'OCEANOGRÀFIC, in which there are various species of fish (such as morays, rays, manta rays, fish). clown, jellyfish and others). It is divided into various climatic zones (in fact, for example, there is the Arctic area where we can find the belugas, penguins and all the typical fish of the Arctic area).

Obviously, the most popular and also very suggestive area is that of the sharks: it would be a great tunnel in which you can walk quietly while above it the sharks and other fish calmly swim. In addition, you can also watch the funny dolphin shows and the cheerful chats with the penguins.

I was very impressed by the oceanografíc and the museo de las ciencias.

It is useless to tell you that it is really worth visiting this complex as both adults and children will surely be impressed and you will have a lot of fun !!

View the embedded image gallery online at:
https://international.aproformazione.it/en/news/item/249-my-erasmus-pro-experience-24#sigProIdd02f29ddad
More in this category: « MY ERASMUS PRO EXPERIENCE #25 Leaving to grow up. Carmen's balance of the experience »
back to top