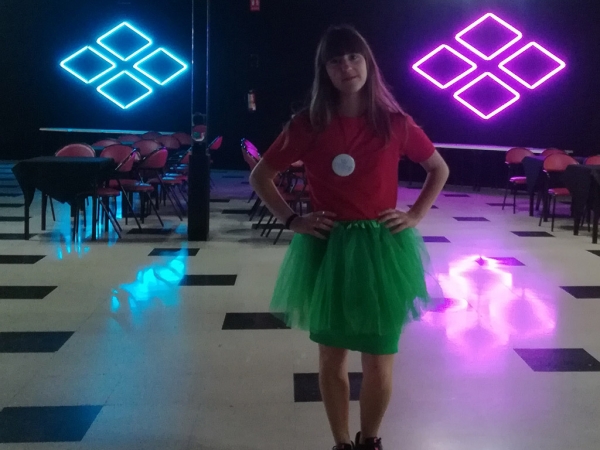 Hello everyone, here we are in the fifth month of Erasmus and at this point I can make a more detailed and complete evaluation. Certainly if you live this experience in the best way, but above all with the desire to grow, it can only be an excellent launching pad and growth opportunity, both personal and professional. Professional because working for 6 consecutive months day after day in the same place (in my case asylum) can only increase one's work experience, opening more and more doors in future job searches.

Speaking of work, unfortunately in the kindergarten where I am doing the internship lessons are close to end. Lessons will end on June 20th and from June 21st the ESCUELA DE VERANO will start, the summer school!

To end the school year, on Saturday, June 15, 2019, the end-of-year festival took place. A show of almost 3 hours in which each class danced a different song, and the GRADUACION took place, which is the promotion of children that the next year will start the elementary school (in Spain corresponds to the primary Educacion) and that of the children that next year will pass to the second cycle.

I open a brief parenthesis to better explain the subdivision of the classes in my nursery. Children between the ages of 0 and 3 are part of the CYCLE PRIMER, what in Italy we call nursery. Those that instead have among 4 and 6 years are the SEGUNDO CICLO, the one that in Italy we identify as a nursery school but that here it is already considered school, because pupils begin to read and write. The children who attended the 2/3 year class this year were “promoted” because they move from nursery school to nursery school.
I was invited to participate in the festival to dance with the baby class (0-1 year) and the Mariposas / Butterflies class (2-3 years): the former danced under the notes of "Baby Shark", the latter one Spanish song called "Bom Bom Chip- Toma fruta". When the time came to enter the scene with the babies, I took a baby and, helping him to walk alone, we arrived at the stage passing by a catwalk. Then I encouraged him to dance remaining on his side. Obviously no baby took a dance step, but only steps to escape from the center of attention! :) It was a really nice moment because as we crossed the catwalk and during the dance, the whole audience didn’t stop smiling for the sweetness of those little dancers. After this dance, I ran to change for the other class. Since the song was about fruit, the dress code could only make me a watermelon! Before going on stage, the "Farfalline", understood what was about to happen and they unleashed hell. There were those who cried, those who kept calling their mothers, those who went around, those who played with chairs, those who asked to have candies. The children who were quiet and in their place could be counted on the fingers of one hand (there were 20 children present). When the curtain was open, almost all the kids had fun jumping, clapping and having fun with their friends. The greatest joy for me was to see in their faces the 32-tooth smiles and their light-heartedness despite not taking any steps and being out of time: this feature is what children teach me every day, since it is typical of childhood and is getting lost growing up.

Once this dance was over, I got comfortable in the chairs and enjoyed the rest of the show as a spectator, because for me it was the first time I attended this festival.

Shortly before the end, when it was time for thanksgiving, the director of the asylum called on the stage all the Spanish teachers and boys who are doing training in the the kindergartens. At a certain point the director says: "In our school there are two Italian girls who are doing their Erasmus with us, I would like to call the girls on stage". When both Carmen and I heard these words, we were so excited. Once on stage, the parents and the teachers applauded us, in particular a teacher hugged me very strongly. I would have never expected such a gesture towards me. If before, I could pretend to be Spanish in front of parents, now I can no longer: my origins have been revealed and now my mistakes will be noticed more! A part from jokes, I was really happy with this surprise because I like to think that this is a recognition of all my efforts here!

I am happy to have taken part in this festival, and I will never be tired of repeating that I am satisfied with myself for having had the courage to stand as a candidate and take part in this Erasmus project.

I greet you and send you a hug to the next article,