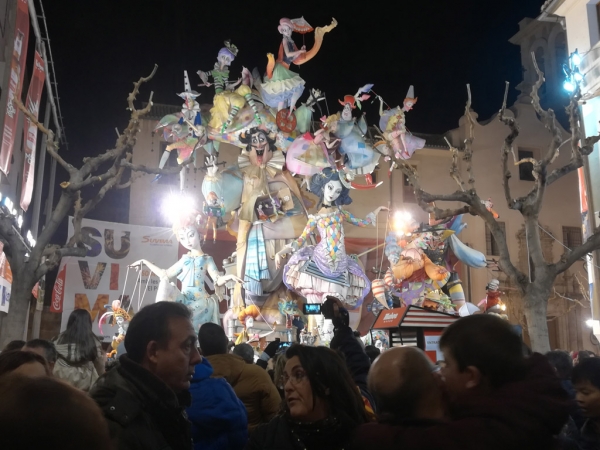 Here is your WonderFrancesca again, this week not much wonder since I recovered from a long and boring cold; in Valencia it is very easy to get sick because it is hot but there is a lot of wind!

Last weekend we breathed the air of the Spanish festivals, the warmth of the Spanish people, their desire to have fun and celebrate, their locura (in Spanish madness): we could watch the long-awaited FALLAS!

The event begins on the last week of February and ends on 19 March, but the focal point of the festival is from 15 to 19 March. To explain it better, I divide it into events:

This event marks the beginning of the festival. The Cridà consists of the call to take part in the celebrations and is carried out by the Serrano towers, that is the ancient entrance and exit doors of the city. The mayor of Valencia, the Fallera Mayor and the Mayor Infantil, the queens of the party elected among the women and girls of the fallas, symbolically kick off the party. During this evening in the facade of the towers images are projected, and behind them the first fireworks show of the fall season comes to life.

It is a firecracker show that takes place every day in Plaça de l'Ajuntament (it is the town hall square in Valencian). Are you wondering what is the point of making fires in the middle of the afternoon that you can't see anything? Right here is the meaning: the mascletà is not a show to be seen but it is to be experienced and felt. Yes, because firecrackers are made to burst continuously and at the same time so as to create a deafening effect capable of making all the organs vibrate inside the body.

I assure you that, despite all the noise and the abundant smoke that causes the mascletà, it is worth seeing it: on this occasion I was able to observe all the enthusiasm and the desire to celebrate that characterizes the Spanish people, and especially the Valencians.

It is the deadline that each district has to complete the construction of its own falla, that is a gigantic monument made of wood, papier-mâché and polystyrene made by artists. Each monument has a different theme that can range from the musical to the creativity, passing through the hidden part of the disguise and Paris etc.

There are two Fallas that each district must realize: a small one that takes the name of Falla Infantil, while the larger one called Falla Mayor.

Once the monuments had the objective of making satire about politics, society and all that was negative; today, instead, they aim to amaze the people who observe them. In my opinion, the most surprising thing is to see the gigantic height of these works and their verisimilitude with reality: especially in a monument I noticed the lucidity of the represented lady's lipstick. To make you believe your eyes later I will attach some photos that I took, even though in reality as far as it can be done well a photo will always remain.

The Ofrenda represents the religious part of the festival: it consists of the "delivery" of bouquets of flowers by the falleros of each district to the "Virgen de los Desamparados", or the patron saint of the city. The Madonna is represented by a huge structure made entirely of wood and the flowers delivered are placed in the structure so as to constitute the Madonna's dress. The falleros, wearing the typical clothes of the past, parade together with the band to the Plaça de la Virgen (the square where the structure of the Madonna is placed, from which it takes its name); the Madonna remains in the square until the flowers begin to wither, losing their beauty.

The Ofrenda is, in my opinion, the longest and most boring event of the entire party, because there are more than 700 neighborhoods that participate in the Falla and there are many falleras that parade through each district; since I am not lucky enough to have a lot of patience after having seen 2 districts parade I started to observe the people who were watching the parade, talking to Catludo and SuperCarmen about the heat and thinking about what I would have eaten for a snack :)

Among the many pyrotechnic shows of the period, the most important and most awaited by the Valencians and not only, is the Nit de Foc: to describe it as a show is not an exaggeration or a lie, indeed!

It is enough to say that it lasts half an hour of clock, and any type of artificial fire is used: those that I liked the most were some that, after being burst, in their slow descent took the form of a serpentine that shone.

When at work they talked to me about this event, I thought that in the end they were simple fireworks, like the ones I used to see in Asti, but once I started I realized that something like that I had never seen before. For those who want to see it, I attach the link to this year's Nit video.

PS: the fireworks that I explained can be found in the minute 13.11. Another "passage" that I really enjoyed is found from 16.30 to 16.49 (I think it is spectacular especially when the fireworks draw the circle thanks to the use of the structure)

This event marks the end of the party. It consists in burning the Fallas: once upon a time, as we have said, these monuments represented politics and society and burning them symbolized that with the arrival of spring the negative things / people of the winter were replaced by positive things / people.

It is a special and nice event, but I did not experience it with the extraordinariness that it deserved: at 10.30pm the Infantiles Falle began to burn and at about 11.00am the big ones burned, but since there weren't enough firemen all over the city, they didn't they could burn all together, because security had to be guaranteed. Counting that the next day we had to start work again, we preferred to go and see a Falla near home: being a neighborhood on the outskirts there weren't many people and it was a fairly quiet thing. Surely that of the town hall will have burned it with scenic effects and we could have lived the Cremà with more astonishment.

For this last week of celebrations, I coined a motto that is: "You know when you arrive in the center but you don't know when you come back!" Seriously having seen this party made me even more aware of the fact that, even if it is already 2 months that I am away from home and I start missing my family, my friends, my city and Italy, it is worth being here and being able to see cities, landscapes and parties different from the one I was used to see.

To conclude if, with these articles of ours, I and the other super heroines have made you want to leave for Valencia, I recommend you come during the Fallas, but you should book the flight and the hotel right now for the next year :)

As we say here hasta luego and I give you an appointment at the next article!

Ps: on YouTube you can find videos of this year's listed events

View the embedded image gallery online at:
https://international.aproformazione.it/en/news/item/217-my-erasmus-pro-experience-10#sigProId8d26632958
More in this category: « MY ERASMUS PRO EXPERIENCE #9 APRO Formazione held the final event of the Erasmus + OPENIN project »
back to top