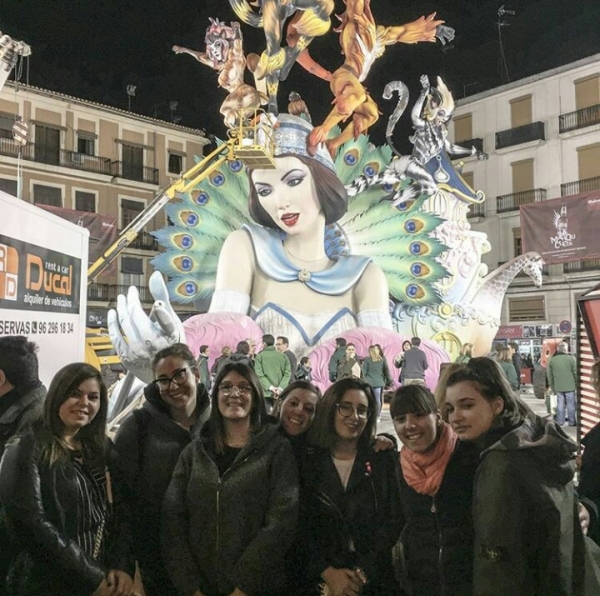 In these days in Valencia there is a mixed climate between party, joy and chaos, because from the end of February "Las Fallas" began, the most traditional and typical festival of Valencia. The most important and intense days are precisely these, since 15 to 19 of March (in fact almost all the shops of the city are closed in these days!).

Since this is a typical Valencian festival, most people experience this feast as a real feeling, so in any part of the city, even in the smallest district, the "fallero" climate is "felt". Flags are hanging, in the street you see many people dressed in traditional clothes and during the day people throw firecrackers on the street and stuff like that.

In Valencia you live this feast from an early age, in fact in the kindergarten where I do my internship the week from 11 to 15 March was entirely dedicated to "the world and the fallera life". The school was decorated (inside and outside) with Valencia flags and with drawings of people dressed as "fallero / a". The children and the teachers (including me) every day were dressed in a "fallero" blouson and / or with only a white and blue checked scarf tied at the neck, because these are the typical clothes of how to dress during the party!

The most typical thing about the "Fallas" are the "monuments" (called "Fallas") which are very, very high statues made by artists for a year. Also parents of kindergarten children were asked to build of the "Fallas" that had healthy nutrition as their theme. Thursday 14 March was a special day! In the morning all the "fallas" made by the families were put out and the most beautiful ones in each class were elected. In the meanwhile the children of the other kindergarten (the one of which Francesca spoke to you), accompanied by their parents and some teachers, came up to our kindergarten on foot and then all together we did a parade along the block. Once back at the kindergarten, the other kindergarten children left, instead the other children remained outside, because the most awaited moment came for everyone, that is, the children had to step on (instead of burning as they do in the official party ) all the "Fallas", except those that had been elected the most beautiful! A very funny moment because all the children, helped by their parents, jumped and broke the "monuments" full of joy, charge and fun! And so on Thursday the "fallas" of my asylum ended, but the one of the city is waiting for us to live it to the full, therefore "Good Fallas to us" !!!